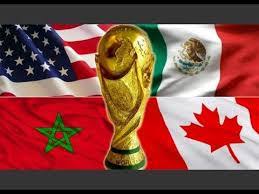 – Morocco will miss the organization of the World Cup 2026 in favor of the United States under the influence of FIFA .

– besides, Saudi Arabia and the United Arab Emirates will vote for the United States, so Morocco has lost votes that some people taken for granted ,given the so-called Arab solidarity ??

-to show their disagreement  toward morocco  these two Arab countries want to send a message to Morocco that has not sided with  them to quell Qatar, it’s weird ,this  mean of reasoning ,to let downMorocco to have shown solidarity with Qatar which is an Arab country, bizarre ,you have to be crazy to understand how  Arab  brain of some Arabs   function or what’s left of  it .

– The suicide rate in Morocco is among the highest in the Arab world, according to some statistics 1 out of 2 Moroccans is melancholic .

-the suicide  touches all strata of society ,the rich and  the poor.

-the causes of suicide are due to psychiatric problems, rapes, financial problems , debts … etc., the individual in our time is measured by his money more than by something else, besides some commit suicide because unable to buy the sheep for Al-aid (a religious feast), it’s a humiliation !!!

– The lack of psychotherapists in schools is one of the factors that increases the suicide rate among young people.

– Moreover the excessive consumption of narcotics  leads people to schizophrenia, whether they are young or not.

-there are more men than women who commit suicide in Morocco.

-the suicide rate has doubled in ten years. In morocco  , and this suicide rate is increasing. worldwide, not just in Morocco.